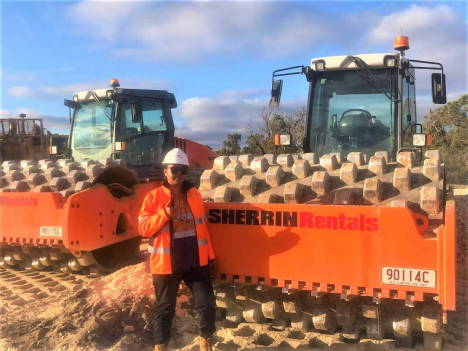 A job skills bootcamp sounds like hard work, but 17-year-old Jah-Kaya proudly attests to it all  being worth it.

The young woman was one of four participants in a targeted TAG Transition to Work (TtW)  program late last year, which included the bootcamp. Jah-Kaya says the skills she learned were  instrumental in helping her to successfully find employment with Wirringulla Workforce.

“With the help of Job Skills Bootcamp, I was able to secure a two-year contract working on the  Mitchell Freeway extension operating roller compactors — all at the age of 17!,” said a  justifiably proud Jah-Kaya.

“I have gained so much knowledge in the past few months being part of the program and team and it made me realise that working hard will now pay off.”

TAG career advocate Simone Stewart, based in the northern Perth suburb of Clarkson, said the  bootcamp was tailored to meet the individual needs of young participants, and helped them  navigate their way to sustainable and meaningful employment.

Participants in the bootcamp had to commit to between 10 and 15 hours per week of  instruction in writing resumes, cover letters, job applications, and interview skills. Importantly,  they also worked closely with career advocates to build confidence and address challenges.

Simone said the journey began by getting to know participants and their individual preferences  like where they might like to work, then identifying skills, skills gaps, and then helping them to  bridge those gaps.

“We’re talking about 16 and 17-year-olds,” she said. “It is their first job and they usually have a  limited set of skills and often don’t have a driver’s license so as career advocates we work with  them to help them overcome these barriers.”

Simone first approached Wirringulla, via All Force Labour Solutions, when another 16-year-old  participant was finding it difficult to make headway with his job applications.

She found a sympathetic ear in All Force Operations Manager Shane O’Meara, who agreed that  everyone deserved a chance, and more than that, was willing to help to provide those chances.

With Simone’s encouragement, the participant got his construction White Card and signed a  contract with Wirringulla, earning more money than most teenagers dream of.

“They just love him, he’s already completed his roller training and they’re paying for him to get  his rail card,” Simone said.

The career advocate provided similar support to Jah-Kaya, helping her to work through some  difficulties. More importantly, Jah-Kaya was encouraged to demonstrate to herself, as well as to  her potential employer, just what she was capable of achieving.

The end result was another contract with Wirringulla.

For Simone, being a career advocate is so much more than ‘a job’.

“I genuinely want to see these kids get ahead and they know that,” she said. “Their success is  our success.”

*Some surnames and names have been excluded from this story