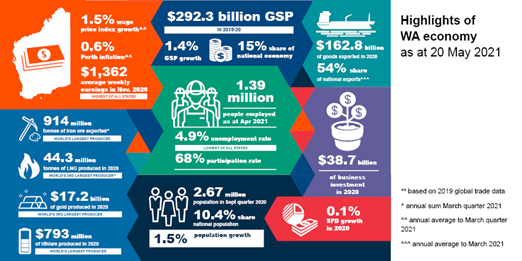 Western Australia’s domestic economic output increased by 3 per cent over the March 2021 quarter, according to the latest ABS quarterly National Accounts date. All other states and territories experienced growth in their domestic economies, but none grew as strongly as WA.

WA Premier Mark McGowan announced a new Skills Summit for the end of this month (June 30) to strengthen the State’s local workforce. The Summit will bring together WA industry leaders from many sectors including resources, defence, construction and healthcare. The aim of the summit is to discuss what more can be done to address the existing skills needs across WA and ensure ongoing competitiveness on the global stage.

Latest workforce data shows more young Australians are at work with the youth unemployment rate dropping to the lowest rate since January 2009. According to figures released in May, the rate dropped 1.1 percentage points to 10.6 per cent, one percentage point lower than in March 2020, before the pandemic hit. Almost 16,000 young people found employment in April.

Childcare and Women’s Participation in the Workplace: Budget 2021 Unpacked

Rebecca Casnells from the Bankwest Curtin Economics Centre unpacked the childcare reform package delivered in the 2021 Federal Budget and how it will impact women’s workforce participation. Ms Casnells said the removal of childcare cost barriers will always drive-up women’s participation in the workforce however, low wages for workers in the childcare sector must still be addressed.

For further detail: Creating jobs and rebuilding our economy | 2021-22 Budget

Federal Resources Minister Keith Pitt said thousands of jobs would be supported by Australia’s resources and energy sectors according to the latest International Trade data. The data shows the sectors performing “remarkably well”, underscoring the sector’s immunity to the economic challenges of the past year.