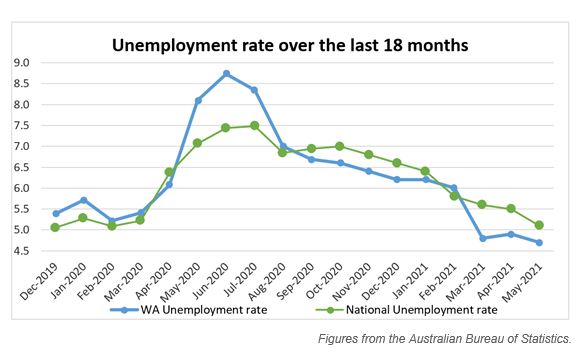 WA Premier Mark McGowan recently unveiled a $5.2 million incentive for businesses to employ 200 new mature aged apprentices and trainees, alongside $4 million to extend the Apprentice and Traineeship Re-engagement Incentive, which was introduced in 2020.

Unemployment drops below 5% for the first time in a decade

Australia’s unemployment rate continued to fall in June, dropping by 0.2 per cent to 4.9 per cent – the first-time unemployment has dropped below 5 per cent in 10  years. WA’s unemployment climbed marginally to 5.1 per cent, increasing from 4.7 per cent in the previous month. The total employed persons in Australia is now 13.125 million – a record figure for the second month in a row.

The Chamber of Minerals and Energy WA reported that the State’s mining, oil and gas, energy and contractor industries contributed $83 billion to the national economy in 2019-2020. Research was conducted across 65 companies, asking them how much they contributed and where.