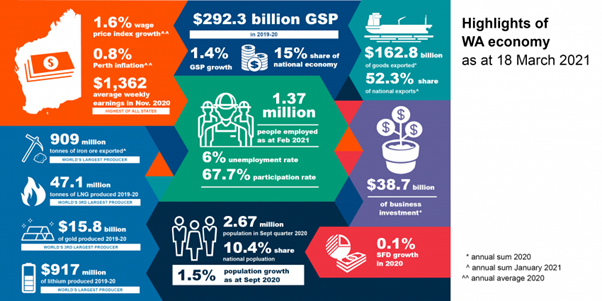 The demand for skilled workers in key areas of the Western Australian economy has been highlighted this year, particularly in the context of lower levels of skilled migration due to coronavirus travel restrictions.

The future of the State’s job market in coming months can be assessed against the backdrop of the snapshot released by the WA Department of Treasury in the first quarter this year. It shows latest highlights of the WA economy, including information on WA’s economic growth, wages, exports, labour force, business investment and population. For more information: Department of Treasury

During a business breakfast in Perth earlier this year, ANZ chief economist Richard Yetsenga told the audience that the pandemic presented an opportunity for Australia to find local solutions to its growing skills crisis. Mr Yetsenga cited the need to train staff to meet coming demands to fill growing gaps in demand.

Chamber of Commerce and Industry WA chief executive Chris Rodwell spoke out about skills shortages cited by around half of WA’s resources, healthcare and construction businesses as a primary barrier to their growth.

He said that building WA’s pipeline of skilled workers in this way was a good solution but said that many WA businesses needed access to skills now, given shortages usually made up by migrant workers.

One of TAG’s core objectives is to provide new skills for mature age employees and job seekers, and we were heartened by WA Premier Mark McGowan’s announcement early this year of a pilot program to offer mature-age people the chance to secure employment in the building and construction industry.

The Premier said that a pipeline of skilled workers was critical to the success of the State’s recovery post COVID-19 and the Government’s priority is to ensure Western Australians fill these roles. https://www.mediastatements.wa.gov.au/Pages/McGowan/2021/01/New-pilot-program-to-employ-mature-age-apprentices-and-trainees.aspx